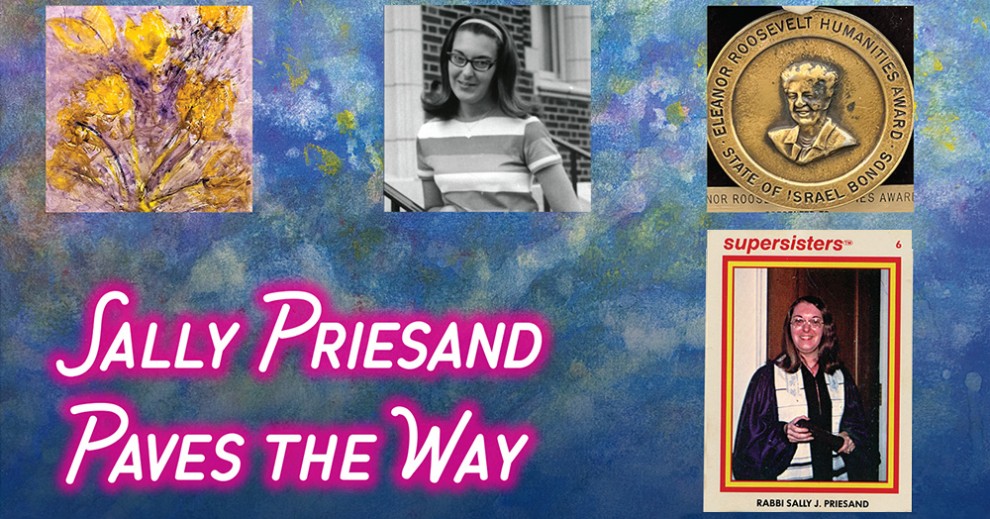 UPDATE: Click here to take a virtual tour of this exhibit

The Jacob Rader Marcus Center of The American Jewish Archives (AJA) is now offering their popular exhibit, Sally Priesand Paves the Way, digitally for everyone to experience. The virtual tour combines primary source documents and photographs along with informative context and inspirational quotes. The exhibit opened in person at AJA in Cincinnati on May 19, which was also the 50th anniversary of women in the rabbinate, and is now available online.

“We believe that the AJA now contains the world’s largest collection of primary source material on the history of women in the rabbinate,” Dr. Gary P. Zola, AJA’s Executive Director and The Edward M. Ackerman Family Distinguished Professor at Hebrew Union College-Jewish Institute of Religion, said. “Our Sally Priesand Paves the Way exhibit provides us with a special opportunity to share these holdings with the public. In making this exhibit accessible to online visitation, the AJA will be sharing its resources with a worldwide audience. No one deserves this kind of tribute more than Rabbi Sally Priesand, a courageous hero and a living legend.”

For Rabbi Priesand, the path to the rabbinate was unprecedented. Although her parents supported her decision, Rabbi Priesand’s road was often an uphill battle. Despite it all, she persisted in following her dreams. As shown in the exhibit, when Rabbi Priesand was 16, she wrote to Hebrew Union College-Jewish Institute of Religion (HUC-JIR) explaining her desire to study there and become a rabbi. In response, the college sent a discouraging letter, stating that the career of a female rabbi was uncertain, and many women choose to pursue Jewish education. Undeterred, Rabbi Priesand managed to be admitted to HUC and quickly became an exemplary student. The exhibit shows that as the only woman in the school, Rabbi Priesand felt pressure to perform better than everyone else to make sure no one would question her abilities. Her ordination, a pivotal moment in history, is marked in the exhibit with her original diploma and the famous 1972 class photo.

Rabbi Priesand’s professional milestones and accomplishments are organized in the exhibit’s five chronological sections. Her formative years are portrayed through family photographs and early writings. Time and again, the exhibit shows that the challenges she faced on the road to rabbinical school were met with drive and determination. Through her persistence, Rabbi Priesand was admitted to rabbinical school and her acceptance letter from HUC-JIR is on display. As the only woman rabbinical student, Rabbi Priesand was called to speak all over the country—her inspirational I believe speech is featured in the exhibit in its entirety. Rabbi Priesand built a long, successful career as rabbi and religious leader depicted through documents such as her prestigious invitation to the US House of Representatives and an Israel Bonds medal. In the final section, many items and books act as a testament to the impact Rabbi Priesand has made on the Jewish religion and the world; They even printed a Rabbi Priesand Priesand trading card.

“I am delighted to share the history of my career with the public and grateful to the American Jewish Archives for creating such a powerful exhibit,” Rabbi Priesand said. “That people all over the world can now access this material virtually is an added bonus, providing people with an introduction to the history of women in the rabbinate.”
When Rabbi Sally Priesand paved the way, she became a living legend. Many women have followed in her footsteps and since her ordination in 1972, more than 1200 women have been ordained in the reform, conservative, reconstructionist, and modern orthodox movements.