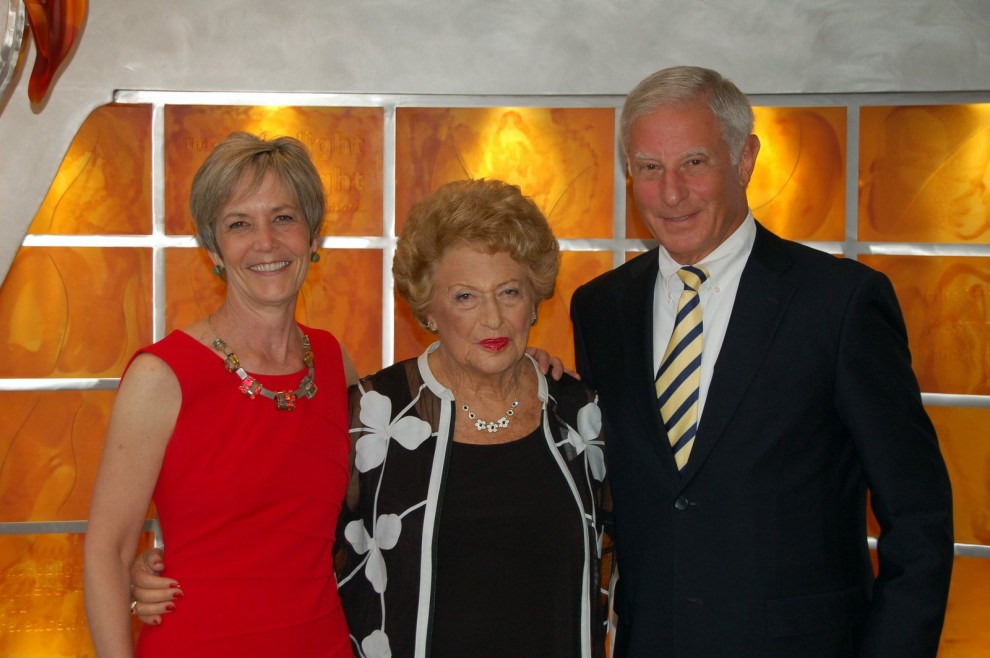 June 6, 2014.  —The Jewish Federation of Cincinnati dedicated The Legacy Flame: Sustaining Our Future during the annual Moss Society reception on Sunday, June 1, at the Mayerson JCC. The sculpture is a living, public tribute to thank donors who have made a legacy gift commitment to a local Jewish agency, organization or congregation, and to inspire future generations to follow in their footsteps.

“Legacy commitments are the fuel that keeps the flame of the Jewish people alive,” said Jewish Federation CEO Shep Englander. The Legacy Flame was inspired by the ner tamid, the Jewish eternal flame above the ark in a congregation, symbolizing God’s eternal presence. Prominently displayed in the Mayerson JCC, the installation combines a beautiful sculpture of metal and glass with an interactive touchscreen that allows visitors to browse multimedia stories about the donors, the impact of their endowments, and the history of Jewish Cincinnati.

“The sculpture has turned out to be a magnificent tribute,” said Frances Schloss. The Legacy Flame was gifted by the Milton Schloss Endowment Fund, a generous bequest made by her late husband to the Federation. “But the sculpture is not just a piece of art.”

It is best practice to have a recognition component in any fundraising program, according to Jim Friedman, Director of Gift Planning and Endowments at the Federation, and Frances’s son. But the inspiration for The Legacy Flame was born out of the Federation’s desire to honor legacy donors in a more dynamic way. When Jim spoke at the event, the audience rose to their feet to acknowledge the magnitude of his vision now fully alive.

“We were trying to find an appropriate way to recognize people who had the vision and desire to create resources for the community that would long outlive them,” said Jim. “That they would be properly recognized and, more importantly, that years from now it will be possible for those viewing The Legacy Flame to know who these people were, more than just a name.” So Jim approached Frances about using some of Milton’s bequest for this purpose.

Milton rose from humble beginnings to volunteer to serve in World War II, rise to captain in the army, hold executive positions at several major corporations, and become a generous donor to the Jewish community. He left an unrestricted endowment of $1 million to the Federation, which was split into two funds. The Milton and Frances Schloss Endowment Fund supports the Mayerson JCC Special Needs and Services department and The Milton Schloss Fund provides for The Legacy Flame. So as people followed Milton into battle and into business, "it is fitting that he is leading the way through legacy giving," said Jim.

“Milton worked very hard all of his life. He was most proud of his ability to give to charity and, above all, to the Jewish community,” said Frances. “Milton wanted to teach people the importance of giving through his example.”

The Federation already knew that they wanted to tell people’s stories in a way that would live on to inspire future generations, so they put together a plan to produce multimedia content. But rather than display these stories on a drab monitor, said Jim, the Federation wanted to complement it with some kind of fine art. Since The Light, by Albert Paley, was prominently displayed at the front of the entrance of the Mayerson JCC, a center of arts and culture, the Federation desired to carry the same sculpture art motif into the building.

Around the same time, glass sculpture artist Brian Russell had a solo exhibition at the Marta Hewett Gallery in the Pendleton Art Center. Frances happened to see a picture of one of his pieces in a local magazine. It was a small glass piece that looked like one individual flame, and it was just the artistic inspiration they were looking for. Marta connected Frances and Jim with Brian Russell, who came to the JCC to begin research for the commissioned art that, after several design iterations, would become The Legacy Flame.

“What’s really remarkable about the sculpture is that it’s not just names etched in glass or on plaques,” said Danielle Minson, the Federation's Chief Development Officer. “The installation combines legacy donor recognition with impactful stories of generosity that have changed people’s lives. And these stories will live on to inspire generations to come.” 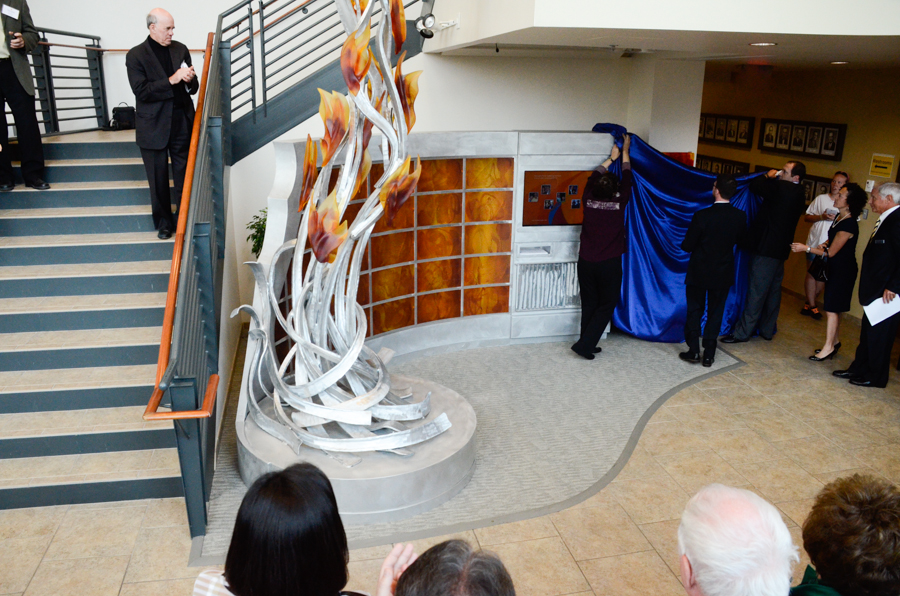 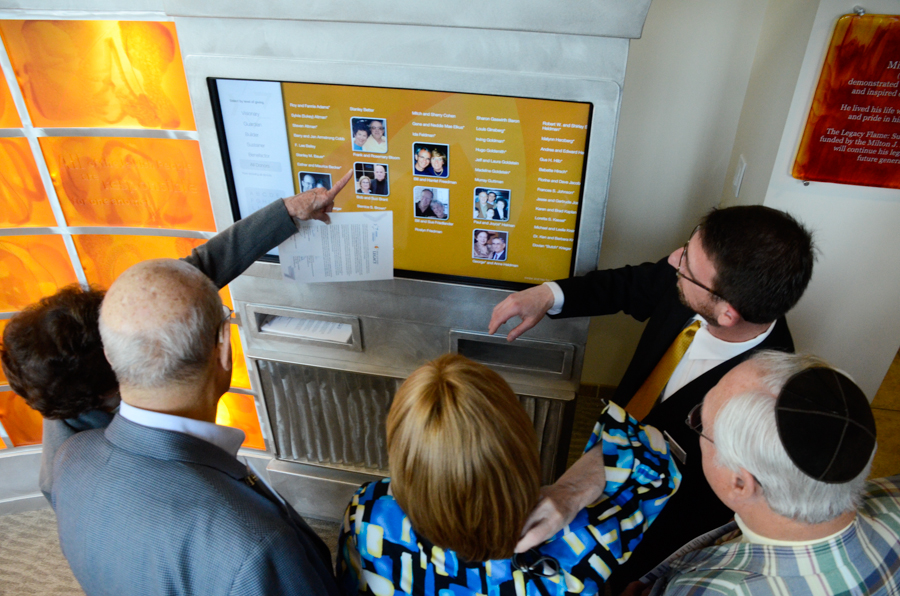 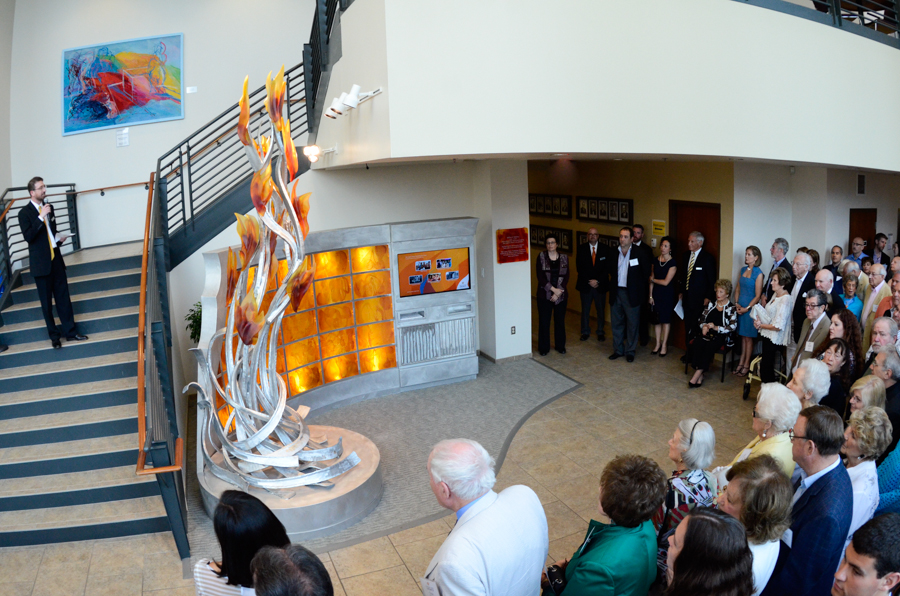