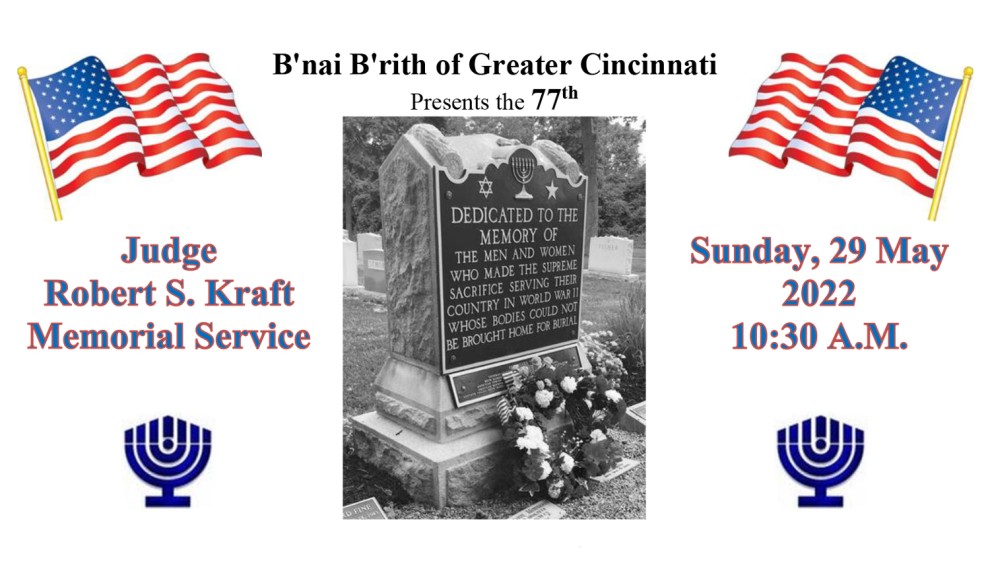 On Sunday, May 29, 2022, B’nai B’rith of Greater Cincinnati will hold their 77th Memorial Service at the Robert S. Kraft Memorial Garden in the Covedale Cemetery.

This unique Memorial Service is held in memory of the servicemen of the Jewish faith from the Greater Cincinnati area, who made the ultimate sacrifice for our country while serving overseas in the US Armed Forces. The program is presented by B'nai B'rith of Greater Cincinnati. Family members of the honored and former members of the Armed Forces, for the 77th year all held at this location, will participate in this program.

The service again will be led by Harry S. Sudman, past President of B’nai B’rith.

As distinguished speakers, we are honored to have Hamilton County Common Pleas Court Judge Jennifer L. Branch, Major Eric Brown, Assistant Professor of Military Science at University of Cincinnati Army ROTC, and President Stephanie Summerow Dumas from Hamilton County Board of Commissioners. The American Legion Post 534 will raise the American Flag, perform a three-volley salute, and will blow Taps.

The War Memorial, established at this location and dedicated October 14, 1945 to the memory of our valiant servicemen, involved the joint efforts of various leaders in the Jewish community, including Louis Weiland. Mr. Weiland, served as the original chairman of the War Memorial Committee, and as chairman of this event until he passed away in July 1982. The late Honorable Judge Robert S. Kraft and Jack Landman then took over as co-chairmen until 1993, followed by Harvey Cheyette through 2014. In 2015, Harvey graciously passed the event to our current chairman Marc Sudman.

The public is invited and encouraged to attend and participate in this service of remembrance which is the only one of its kind in the area.

Inclement weather will not prevent us from holding this special event.