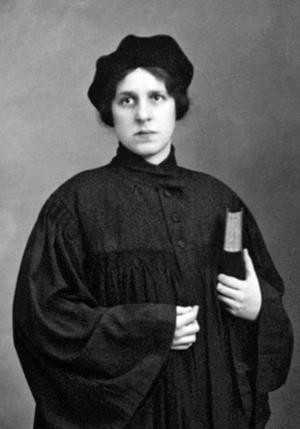 This event is FREE and open to public.

A historic gathering of the four American Jewish women who were the first female ordinees of their denominations to honor the memory of history’s first woman rabbi, Regina Jonas (1902---1944).

This year marks the 80th anniversary of the ordination of history’s first woman rabbi, Regina Jonas (1902-1944). Fraulein Rabbiner Regina Jonas served the Jewish community of Berlin until November 1942, when she and her mother were deported to Theresienstadt. On October 14, 1944, Rabbi Jonas was sent to Auschwitz where she was murdered upon her arrival.

To honor Rabbi Jonas’s memory and heroic legacy, the American Jewish Archives (AJA) has invited the first women rabbis from four spiritual movements in American Judaism to come together and share their own pioneering stories and respond to questions about their respective rabbinates. This will be the first time all four women will gather in the State of Ohio.

On July 24, 2014, all four of these pioneering American women rabbis traveled to Theresienstadt in the Czech Republic for a dedication ceremony at the Terezin Memorial (site of the former Nazi concentration camp). The United States Commission for the Preservation of America’s Heritage Abroad organized the event to honor the memory of Rabbi Regina Jonas.

“Rabbi Jonas’ remarkable contributions to the world and to humanity were made during the darkest of times," observed Dr. Gary P. Zola, Executive Director of the AJA and a member of the Commission. “She was a trailblazer and her career has been a beacon for hundreds of American women who consider her to be their beau ideal. In that sense, Rabbi Jonas has been an inspiring force for America's religious heritage over the past four decades.”

ABOUT REGINA JONAS
Born in Berlin, Regina Jonas attended the liberal rabbinic seminary, Hochschule fur die Wissenschaft des Judentums, where she completed a full rabbinical curriculum. Jonas also wrote a rabbinical thesis titled “Can Women Serve as Rabbis?” – a microfilmed copy of which is now preserved at the American Jewish Archives. Unfortunately for Rabbi Jonas, her thesis advisor, Rabbi Eduard Baneth (1855-1930), died just before she completed her studies and his successor, Rabbi Hanoch Albeck (1890-1972), refused to confer a rabbinical title on her. Jonas left the Hochschule in 1930 with only a teaching diploma in hand.

Surviving documents testify to the fact that Regina Jonas never abandoned her dream of becoming a rabbi. Over the next few years, she continued to teach, study, and occasionally preach. After Hitler’s rise to power in 1933, the German Jewish community confronted unprecedented challenges. In response to the ongoing process of social demonization and ostracization imposed by the Nazis, German Jews increasingly turned to the Jewish community for support. It was in the midst of this time of crisis – in 1935 – that Regina Jonas received rabbinical ordination from Rabbi Max Dienemann (1875-1939) of Offenbach on behalf of the Liberal Rabbinic Association in Germany.

Known thereafter as Fraulein Rabbiner Regina Jonas, she served the Jewish community of Berlin— where she quickly gained a reputation as a “gifted public speaker” who was “born for the pulpit”. In November, 1942, she and her mother were deported to Theresienstadt where she continued to fulfill her dream of serving as a rabbi and teacher. During those years of incarceration, Jonas preached sermons, provided mental-health care to those arriving at the camp, and offered learned lectures on Jewish topics for her fellow prisoners in Theresienstadt. Finally, on October 14, 1944, Rabbi Jonas was sent to Auschwitz where upon her arrival she was murdered.

For nearly 50 years after she was murdered Auschwitz, she remained largely forgotten. It was not until many of her papers were discovered in 1991 that her history and legacy began to come to light.