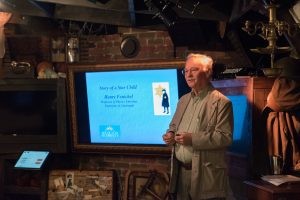 The Holocaust Speaker Series, held each Wednesday at 11:00 am, features Holocaust survivors and descendants of survivors sharing stories of life before, during, and after the Holocaust. Join us on Wednesday, August 3 at 11:00 am via Zoom with Henry Fenichel.

Henry Fenichel was born in The Netherlands in 1938. Shortly after the Nazi rise to power, sensing the danger, Henry’s parents sent a request for their relocation to Palestine where his father’s family resided. After Henry’s father was deported and murdered by the Nazis in Auschwitz, Henry and his mother still had no response to their request to immigrate. They then went into hiding. When Henry was four years old, he and his mother’s hiding place was discovered and they were transported to the Westerbork transit camp. Shortly after arriving, they learned of a prisoner exchange that would allow a select number of Jews to escape to Palestine. Through a miraculous series of events, Henry’s mother was able to get them on the list for “transport 222”. In June 1944, Henry, his mother and 220 other Dutch individuals left Bergen-Belsen concentration camp, eventually arriving to freedom in British Mandate Palestine. Upon arriving in Palestine, Henry was placed in a children’s home. His mother remarried, and with the help of his step-father’s family, came to America in 1953. Henry taught Physics at the University of Cincinnati for 38 years.