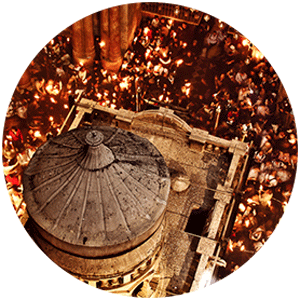 Journey to one of the world's most beloved cities.

Take an inspiring and eye-opening tour of one of the world’s oldest and most enigmatic cities. Destroyed and rebuilt countless times over 5,000 years, Jerusalem’s enduring appeal remains a mystery. What made it so important to so many different cultures? How did it become the center of the world for three major religions? Why does it still matter to us?

Jerusalem attempts to answer these questions by following three young Jerusalemites and their families – Jewish, Christian and Muslim. Through their eyes, learn what it means to call Jerusalem home and experience celebrations and events that mark the high points of a year in the life of the city.

Also follow noted archaeologist, Dr. Jodi Magness, as she explores some of the most extraordinary historical sites in the region in order to better understand how this region became a true crossroads of civilization.

Narrated by Benedict Cumberbatch (Sherlock, 12 Years a Slave), Jerusalem gives completely unique perspective of a part of the world that still captivates the imagination of billions of people.