Behind every big court case, there’s a human story. 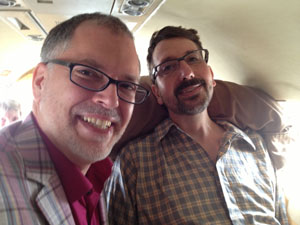 Obergefell vs. Hodges is the Supreme Court case that will put marriage equality issues in the history books. Jim Obergefell and John Arthur had been a couple for nearly 21 years. Two weeks after the 2013 Supreme Court ruling that the federal government must recognize same-sex marriages, the couple was legally married, but it wasn’t easy. John was in the final stages of Lou Gehrig’s Disease, so the couple flew from Cincinnati to Maryland on a medical jet and were legally married on the tarmac.

When they returned home, they learned their marriage would not be recognized in Ohio. With nothing to gain but respect, they filed a law suit. Jim says, “We did it because we wanted our marriage to count. Never did we think it would turn into something that would impact the entire United States.” But Jim and John’s story has gained national attention, with a Supreme Court ruling to be announced by June.

This national case is historic, but it’s also personal, and it also originated right here in Cincinnati.
On June 4, we have a rare opportunity to glimpse into the human side of legal history, as Jim shares his story with us.

Jim Obergefell will soon become a well known name with historic ramifications on marriage equality and the role of the state in marriage. Come to hear the human story and to ask questions in dialogue with a fellow Cinicinnatian whose story is making history.