Free and open to the public. Reservations are encouraged.
Refreshments will be served after the lecture. Dietary laws observed. 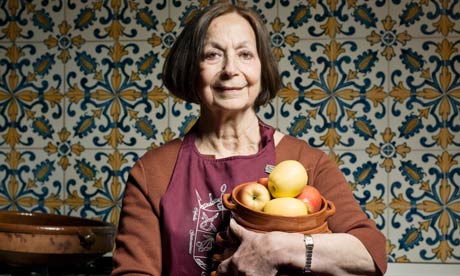 Claudia Roden is a food intellectual who integrates popular approaches to food with the academic study of food. She is president of the Oxford Food Symposium on Food & Cookery which is an annual, weekend-long conference held at Oxford University on food, its culture and its history. The most important gathering of its kind, it brings together over 200 international scholars, journalists, chefs, scientists, sociologists, and anthropologists for a serious discussion on food.

Claudia Roden is best known for her Egyptian approach to Jewish food. She is the author of many books about Jewish food including her magnum opus, The Book of Jewish Food, An Odyssey from Samarkand and Vilna to Present Day (1997). She has served as a foreign food correspondent for The Daily Telegraph, and has traveled to Italy researching that country's cuisine for The Sunday Times Magazine. Later, she hosted a BBC TV series, Claudia Roden's Mediterranean Cookery, and authored a variety of articles for magazines such as Gourmet, Food and Wine, Bon Appetit, and Food Arts.

She has received the highly respected James Beard Award for the Best Cookbook of the Year in 1997 and the National Jewish Book Award. She has also won six Glenfiddich prizes, most notably the 1992 Food Writer of the Year and the Glenfiddich Trophy. She has also been awarded the two most prestigious food prizes in Italy: the Premio Orio Vergani and the Premio Maria Luigia, Duchessa di Parma in recognition of her London Times Sunday Magazine series "The Taste of Italy." She won a 1999 Versailles Award in France, and Prince Claus of the Netherlands acknowledged her with the Prince Claus Award in recognition of exceptional initiatives and achievements in the field of culture.

2014-2015 Lichter Lecture Series
“Without food, there is no Torah; without Torah, there is no food” (Pirkei Avot, 3.17). Eating practices are deeply embedded in Jewish civilization including questions of what Jews eat, what Jews do not eat, when to eat, when not to eat, with whom to eat and how to prepare foods.

This year’s Lichter Series shares some of these new insights so that we can go beyond a conventional acknowledgement that food plays an essential role in Jewish life to a more sophisticated realization of eating as a practice that reflects and promotes values and ideologies. The series approaches the topic from three angles: Jewish food in antiquity, food and contemporary Jewishness, and modern Jewish food practices.