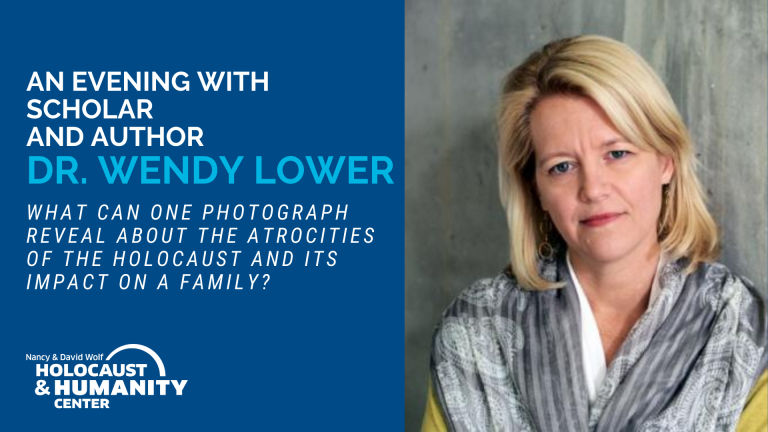 What can one photograph reveal about the atrocities of the Holocaust and its impact on a family? Join us to hear from Dr. Wendy Lower, author of The Ravine: A Family, A Photograph, A Holocaust Massacre Revealed, as she shares her journey to uncover what took place during massacres in Ukraine during the Holocaust based on a single, rare photograph. Dr. Lower’s research unlocks a new understanding of the place of the family unit in the ideology of Nazi genocide.

Dr. Wendy Lower is the John K. Roth Professor of History and Director of the Mgrublian Center for Human Rights at Claremont McKenna College. She chairs the Academic Committee of the U.S. Holocaust Memorial Museum. Her research and teaching focus on the history of genocide, the Holocaust and human rights. She is also the author of Hitler’s Furies: German Women in the Nazi Killing Fields, a 2013 finalist for the National Book Award. A few of her other books are The Diary of Samuel Golfard and the Holocaust in Eastern Galicia; The Shoah in Ukraine: History, Testimony, Memorialization (co-edited with Ray Brandon); and Nazi Empire-Building and the Holocaust in Ukraine.