Get your discount tickets now! Until Tuesday, October 21, at midnight, get $2 off the Thursday, October 23, performance of the Theresienstadt Opera Project at the Mayerson JCC, by using the promotion code CHHE. 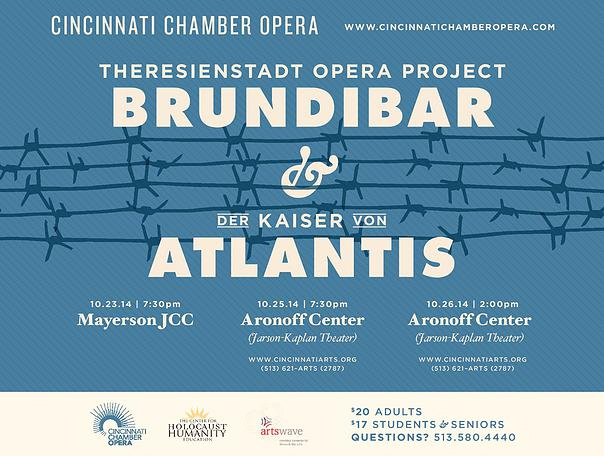 Produced by the Cincinnati Chamber Opera, The Center for Holocaust and Humanity Education is proud to present this local production of operas composed or performed in the Theresienstadt Ghetto.

When the children in the Prague Jewish orphanage were sent to Theresienstadt ghetto, few things gave them hope....except for music. They performed the opera Brundibar over 55 times in the ghetto.

Composer Viktor Ulmann was in Theresienstadt when he wrote the opera Emperor of Atlantis, a satire on Hitler. Ulmann, and many others in Theresienstadt, used their art to keep a shred of their humanity, to resist the Nazi oppression, and create a world where good prevails evil.

Please join us for performances of the children operas Brundibar and Emperor of Atlantis to remember the lives of those children, women and men, and the art they created.