Golf Manor Synagogue, a Modern Orthodox shul, is the oldest surviving Orthodox synagogue in Cincinnati. The shul proudly upholds the core beliefs of Orthodox Judaism alongside the best of the modern Jewish world, including support for the State of Israel and its citizens; fearless engagement with the world; and a constant striving for intellectual honesty. Prayer services are held three times a day; Torah classes are offered for all, from beginners to advanced students. 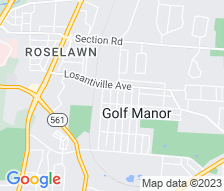