Chartered by an act of Congress in 1958, the National Museum of American Jewish Military History (NMAJMH), under the auspices of the Jewish War Veterans of the U.S.A., documents and preserves the contributions of Jewish Americans to the peace and freedom of the United States, educates the public about the courage, heroism, and sacrifices made by Jewish Americans who served in the armed forces, and works to combat anti-Semitism. Admission is free. 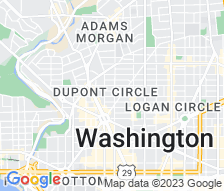